Mary the Queen to the Lord Mayor & sundry citizens of London,

Her Majesty’s speech given at Guildhall, on the eve of Candlemas

The first day of February, Anno Domini 1554, being the first of her reign: 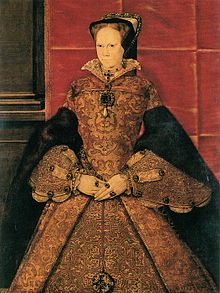 Mary Tudor early in her brief reign 1553-1558 – note the famous pearl which was later owned by Elizabeth Taylor.

There is some debate about the exact nature of the speech made by the queen and two principle versions exist and there are substantial differences between them although the tone and character of the two are consistent. John Proctor’s version is currently the accepted primary source by historians such a Professor David Loades and Anna Whitelock in her more recent history of Mary’s reign.

John Foxe assures us he was given his version of the speech by one of those attendant at Guildhall who wrote the speech down. It was customary for the Mayor’s clerk to make a check roll of royal addresses so that may be how the speech was recorded. There would therefore have been several clerks making verbatim notes at the time and probably various versions existed at one time or another.

I have chosen Foxe for two reasons: first, it is the version the English would have known readily since the Book of Martyrs together with the Bible were the two works held in every English and Irish parish church after 1588. Secondly, Foxe feels the need to add a note which in its churlishness seems at least to authenticate the fact that Mary’s speech at the time was widely regarded as a model of persuasive rhetoric.

It remains an extraordinary insight into the political skills of the Tudor monarchy. Unlike Elizabeth’s address at Tilbury, when it was known already the the Spanish armada was dispersed, Mary gave this speech when events might have moved either in her favour or against. She demonstrated remarkable nerve and certainty Hers is one of the few speeches history has to actually attest to the power of words. Mary Tudor moved men’s and women’s hearts and thereby we can say this speech changed the course of events. 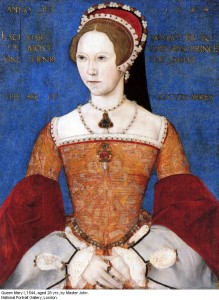 1544 – Mary about 28, note the sleeves – a stylistic flourish of her invention

Once more it is an example of how Mary as one of England’s most extraordinary rulers has been written out of history just as Elizabeth’s monument in Westminster Abbey subsumed her half-sister’s resting place. In her will she asked her half-sister to bury her in the Westminster Abbey together with the remains of her mother. The instruction was never executed. Katherine of Aragon’s remains are still in Peterborough Cathedral (Abbey) where from time to time a private mass is said over her grave. Mary herself is no more than a footnote carved in marble upon the concoction erected by James I over Elizabeth’s & Mary’s joint tomb. Edward VI is laid to rest just outside the Henry VII chapel – perhaps even more of a footnote walked passed unnoticed by generations of tourists.

Mary may not have had the intellectual brio of Elizabeth nor the romantic elan of Mary Stewart but she had all the practical sense and courage and determination to become England’s first regnant female; hold her throne; marry whom she chose; impose the reformed catholicism of Trent upon the country; take the country into a war with France and to her last breath, like her father, hold to the course she set. Remarkable seems way to small a word for such a huge achievement.

And even if the queen Mary, as Foxe’s sourly notes, had ‘conned’ (learnt by heart ) the speech in advance in doing so she would have been following in the footsteps of Cicero – who provided the model for political rhetoric in the sixteenth century!

J Am come vnto you in mine own person, to tell you that which already you see and know: that is, howe traiterously and rebelliously a number of Kentish men haue assembled them selues agaynst both vs and you. Ther pretence (as they sayd at the fyrst) was for a mariage determined for vs: to the which, and to al the articles thereof ye haue bene made priuy. But sithence we haue caused certain of our priuy Coūsail to go again vnto thē, & to demaund the cause of thys their rebellion: and it appeared then vnto our sayd Counsail, that þe matter of the mariage seemed to bee but as a Spanish cloke to couer their pretensed purpose against our religiō: MarginaliaSo that they arrogantly & trayterously demaūded to haue the gouernaunce of our person, the keeping of the Tower, and the placing of our Coūsailers. Now louing subiectes, what I am ye right well know. I am your Queene, to whō at my Coronation whē I was wedded to the Realme and lawes of the same (the spousall Ring whereof I haue on my finger, which neuer hetherto was, nor hereafter shall be left of) you promised your allegeaunce and obedience vnto me. And that I am the right and true inheritour of the Crowne of this Realme of England, I take all Christendome to wytnes. My Father, as ye all knowe, possessed the same regall state, which now rightly is descended vnto me: and to hym alwayes ye shewed your selues most faithfull and louing subiectes, and therefore I doubt not, but ye wil shew your selues likewise to me, and that ye will not suffer a vile Traytor to haue the order and gouernaunce of our person, and to occupy our estate, especially being so vile a Traitor as Wiat is. Who most certainly as he hath abused myne ignoraunt Subiectes, which be on his syde, so doth he entend and purpose the destruction of you, and Marginaliaspoyle of your goodes. And this I say to you in the word of a Prince: I can not tell how naturally the Mother loueth the Childe, for I was neuer the mother of any, but certainly, if a Prince and Gouernour may as naturally & earnestly loue her Subiectes as the Mother doth the Child, then assure your selues, that I being your Lady and Maistres, doe as earnestly and as tenderly loue and fauour you. And I thus louing you, can not but thinke that ye as hartely and faythfully loue me: & then I doubt not, but we shall geue these rebells a short and speedy ouerthrow. 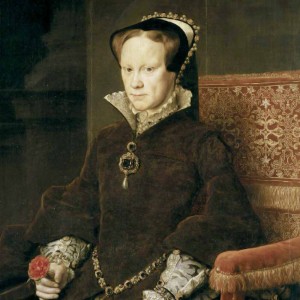 Marriage portrait, painted in 1553/4 – for Philip II (of Spain). Mary is 37 on her accession. The original is displayed in the Prado, Madrid and was painted by Antonio Moro

As conceruing the mariage, ye shall vndrestand that I enterprised not the doing thereof without aduise, and that by the aduise of all our priuy Counsail: who so considered and weyed the great commodities that might ensue therof, that they not onely thought it very honorable, but also expedient, both for the wealth of our realme, and also of all you our Subiectes. MarginaliaAnd as touchyng my selfe, I assure you, I am not so bent to my will, neither so precise and nor affectionate, that either for myne own pleasure I would chuse where I lust, or that I am so desirous as needes I would haue one. For God I thanke hym, to whom be the prayse therefore, I haue hetherto lyued a Virgin, and doubt nothing, but wyth Gods grace am able so to liue still. But if, as my Progenitours haue done before, it might please God þtI might leaue some fruite of my body behinde me to be your Gouernour, I trust ye would not onely reioyce therat, but also I know it would bee to your great comfort. And certainly, if I eyther did thinke or know that this mariage were to the hurt of any of you my Commons, or to the empechment of any part or parcell of the royall state of this realme of England: I woulde neuer consent thereunto, neyther would I euer marry whyle I lyued. And in the worlde of a Queene I promise you, Marginaliathat if it shall not probably appeare to all the Nobility and Commons in the hygh Court of Parlament, that this mariage shalbe for þe high benefite and commodity of all the whole Realme, then I wyll abstayne from mariage whyle I lyue.

And now good Subiectes, plucke vp your harts, and like true mē, stand fast against these rebels, both our enemies and yours, and feare them not: for I assure you, I feare them nothing at all, and I wyll leaue wyth you my Lord Haward & my Lord Treasourer, who shalbe assistentes with the Maior for your defence. 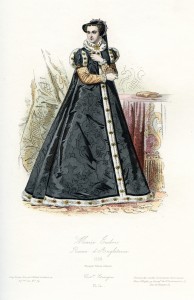 (Here is to be noted, that at the cōming of Q. Mary to the Guild Hall, being bruted before that she was cōming with harneßed men: such a feare came among thē, that a number of the Londoners fearing lest they should bee there entrapped and put to death, made out of the gate before her entring in. Furthermore, note that when she had ended her Oration (which she seemed to haue perfectly conned without booke) Winchester standing by her, when the Oration was done, with great admiration cried to the people: O how happy are we, to whō God hath geuē such a wise & learned Prince? &c.)

The day was to end on a triumphant note as news reached the city that the duke of Suffolk (the father of Lady Jane Grey) now twice traitor to Queen Mary who had been successfully arrested by the earl of Huntingdon was being ignominiously returned to the Tower.