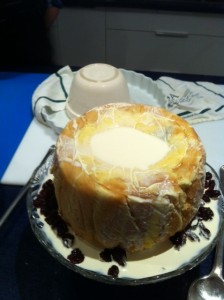 Circumcision takes place on the eighth day after birth…I believe from memory as instructed both to Abraham in Genesis and to Moses in Exodus and Luke also confirms Jesus was circumcised on the eighth day….The Church calendar keeps to all sorts of odd little rituals like this…. Candle-mas is the exact number of days required before the woman can return to the church…hence the feast of Purification of the Blessed Virgin…marked with candles…though that may be borrowed from Yule and Birgit’s festival in Ireland….and of course the feast of the Annunciation when Mary falls pregnant by the power of the Holy Spirit is kept of 25th March exactly nine months before Christ is born….

The next question is why the Jews chose the eighth day….here is a good medical reason….

“Holt and McIntosh, in their classic work, Holt Pediatrics, observed that a newborn infant has “peculiar susceptibility to bleeding between the second and fifth days of life…. Hemorrhages at this time, though often inconsequential, are sometimes extensive; they may produce serious damage to internal organs, especially to the brain, and cause death from shock and exsanguination” (1953, pp. 125-126).”

To believers of course the fact that there appears to be a medical reason only goes to establish the literal truth of biblical revelation – this being only one example of an all knowing God giving the Jews his chosen people an all knowing helping hand….

Equally one might argue that by the time the scribes has got around to writing these books…that by trial and error the Jews (and others who circumcised) had already discovered that the eighth day was safest…. and thought it would be even safer if they wrote it down as a ‘rule’…that would be the historians’ preferred explanation…

At the party yesterday someone asked about feasts and solemnities….

In the Catholic Church there is a hierarchy of Holy Days…some are memorials which may be kept according to local custom, some are feasts and will kept unless they occur on a Sunday…and some are Solemnities and are always kept…Christmas, Easter, Ascension, Whitsun are Solemnities but other days are also given that status…Corpus Christi, St Peter and St Paul, St John the Baptist, The Annunciation, The Immaculate Conception of B.V.M. and the Glorious Assumption of B.V.M. immediately come to mind though there will be others…..

Today the eight maids come a milking in our Carol of the Twelve Days…said to be configured to the eight beatitudes….found famously listed by Jesus in his Sermon on the Mount….which begin…Blessed are the poor inspirit for theirs is the kingdom of heaven…that is the same occasion when Jesus gives us the Our Father…

It’s a great dish…never fails to impress and is so easy to make….I’ll put up the recipe on my page….though there’s also a brilliant recipe to be found in Julia Child ‘Mastering the Art of French Cooking’…a book akin to a bible for every serious or aspiring cook…it reads like a novel…which may explain why I find it so hard to get published…I must get out more….

I was listening to something on Radio 4 yesterday when I was cooking for the party we gave here…thanks to all who came…and a learned person was deep in a conversation about New Year’s Gifts being given to Elizabeth I in her hey days….I’ve only one small problem with this expert opinion…New Year in the sixteenth century was not the 1st of January…whatever day they were giving the queen her presents…New Year’s gifts would have been presented on ‘Lady Day’ – The Feast of the Annunciation on 25th March…..at court presents in the Christmas Season were given on Innocents Day and received on 12th Night…..

This entry was posted in Religion and related subjects. Bookmark the permalink.

One Response to Eighth Day of Christmas