Of monuments and men – or indeed women…

What should become of the statues of Cecil Rhodes?

Since the Greeks at least public statues have been one way in which we recognise greatness. As a corollary their destruction has been an established way in which we have made known our disapproval or  made public our disavowal.

Many Greek and Roman statues fell victim to mob rule. That pattern often repeated itself in later periods of history. The giant statue of Louis XV in what was then the Place de Louis XV but became successively Place de la Revolution before its incarnation as the Place de la Concorde – was pulled down in the early stages of the Revolution and broken up and pieces then thrown into the Seine. The great public space that sits at the east end of the Champs-Élysée then provided a perfect public location for what by accident rather than intention became the most enduing symbol of French Revolution – the guillotine. The killing machine was erected in the place where Louis XV’s statue had lorded it over Paris. Here the Terror played out its public history and it is here therefore both Louis XVI and Marie Antoinette met their end. Nothing better illustrates the fickleness of fate when it comes to heroic statuary and like the Colossus of Rhodes the braggadocio of the super-human most often turns out to own feet of clay. Recently in cape town the giant figure of another colossus  – Cecil Rhodes – 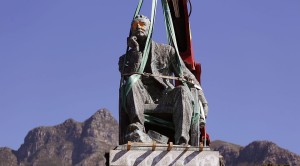 was moved-on and moved out of public view.

There was a times when all the soviets of Russia and all the cities of her satellites in the East of Europe owned at least a couple of heroic statues of Lenin – and more than a few Stalin too. They stared into some distant future which seemed to be theirs  but now they’re consigned to empty fields where they stand mute monuments to what is seen to have been a fleeting moment in world history. Still the wheel of fortune forever turns and Stalin is back in favour in Vladimir Putin’s Russia and who knows perhaps one or other of Stalin’s giant bronze incarnations will command Red Square as once he did in another time. 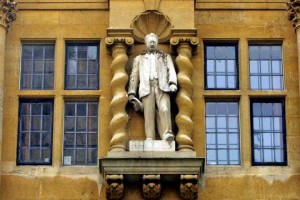 There has been for sometime brouhaha amongst from amongst the students at Oriel College over a statue of Cecil Rhodes. The Oriel Students are following students in South Africa where the Rhodes Must Fall movement wishes to remove the larger than life bronze of Cecil Rhodes seated,  by Marion Walgate,  from its place in front of the University of Cape Town. Given the history of apartheid the sensitivity of the South African students to the presence of this looming figure from the age of Tycoons might be easily understood.

Let it be known I hold no torch for Rhodes – as a political buccaneer or robber industrialist or as maker of Imperial states by Royal Appointment (South Africa, Northern and Southern Rhodesia). I have been to the Rhodes museum near Bishop’s Stortford because Richard’s mum managed it for some years. It was not inspired collection of memorabilia but then I hold no particular torch for the armaments making magnate Alfred Nobel either; nor Vanderbilt ; nor the Rockefeller; nor Carnegie nor Morgan nor Ford despite their vast endowments to the public weal. Rhodes certainly splashed his wealth about and It might be recalled that the Rhodes Scholarships have provided many of the poor a life chance they might not have otherwise obtained.

Quaintly it appears the students at Oriel who are in a froth over a physical representation of Rhodes over a building he endowed have not suggested the University and College ceases to use the endowment Rhodes made to fund the University, the college and student bursaries. In Princeton there is a similar furore over the buildings named for one of the the University’s most famous sons President Woodrow Wilson (of five freedoms fame) who for all he was a progressive in many ways also owned some seriously unsavoury – if then widely shared – ideas about white racial superiority and segregation of the races.

There is a famous nineteenth century statue of Richard I (Lionhearted) outside the Houses of Parliament which was erected in the Victorian Imperial heyday when the Crusades were seen in the West generally in a very different and generally positive light – as many of my generation will know well from the TV series from the early 1960’s with the king played by Dermot Walsh. Not so very far from that statue stands another statue – of Oliver Cromwell – who in addition to cutting off the head of Charles I (the Martyr) and abolishing Christmas, as near as dam it committed what today would be termed acts of genocide in Ireland in the fevered times of the English Civil War – a catastrophic conflict that – rather like the disaster at Verdun and the Somme whose centennial we mark this year – left an indelible scar on England’s political psyche.

Revolutions and Revolutionaries often angrily sweep away the public statuary of their oppression though seldom in human history do such gestures end the oppression of ideas and ideologies; or simply mitigate the oppression of men and women exploiting their fellows which, like larceny, appear in history both on a grand and petty scale though the tyranny for those so oppressed is very much the same. 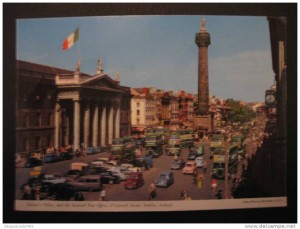 Notoriously in the 1960’s the IRA blew up the column & statue to Nelson erected in Dublin. The pillar as it was know was in fact built in 1808 and long before the iconic column that now stands in Trafalgar Square. It was the work of the Irish architect Francis Johnston who was also responsible for the General Post Office. Out of fashion in the Nationalist Revolution post 1916 the work of Irish artists and architects under ‘British rule’ is now regarded as a central part of Irish history – to be treasured; to be conserved and to be admired.

Some years back a controversy broke out over the erection of a statue to Air Marshal Dowding the man who master-minded the bombing campaign that led to the gratuitous burning of Dresden in the last months of World War II. The statue stands in the Aldwych outside the Air Force Church (St Clement Danes). It also stands for all the ambivalence that comes from war – and in my view his statue rather reminds us even a war we can feel comfortable about in principle in practice has its disturbingly dark side.

Our public art is all part of who we are and from whence we came but it is surely false to claim that because something was put in place to glorify the memory of a person or idea of which we no longer approve it should be removed from the public space. Were that to be a worthy intellectual verity then what might stand for very long – let’s pull down Achilles in Hyde Park erected to the glory of Wellington – who owned some awful ideas as well as supporting some terrible things in the aftermath of the Peterloo Massacre – or perhaps we might as well bulldoze Versailles or the Winter Palace or San Souci or even dare I say St Peter’s in Rome. It is rather by accident James II still rides high in a small way outside the National Gallery – dressed emphatically as a Caesar – and his Stuart and Catholic presence does not seem to evoke any emotional response from passing londoners  – though it might still do so were it to be moved to Belfast or Derry…

Public art certainly commemorates and fixes in bronze and stone ideas we own about our past or at least how we saw that past at a given time. These days none of those anonymous generals who fill the plinths around Whitehall would earn a statue though a David Bowie or a Lennon and McCartney might. Poor Oscar Wilde had to wait for changed times to earn a place in bronze – but nothing is forever and times might again change and in a future Wilde may seem less heroic…who knows?

Our ideas about ourselves and what is praiseworthy or simply artistically worthy changes with time and continues to evolve. It will not remain the same and its evolution does not end until humanity ends. The public art that is left behind is a commentary on changing values and changing ideas about what is valuable. The physical presence of that past is not a threat to our contemporary values rather it is a commentary upon the process of how we reached them. I wonder what those angry students think about the Terracotta Warriors of the murderous Qin Shi Huang, the first Emperor of China; or the surviving statues of some of the bloody men who ruled Pharaonic Egypt or Rome; or the even the remnants of Palmyra recently turned to rubble by ISIS….

Grand gestures most often betoken the human predilection for making public statements which substitute for looking into our hearts and getting the measure of the selfish demons – pride; greed, avarice, anger and covetousness and on – to which we all seem heirs but about which we’d rather not be reminded….