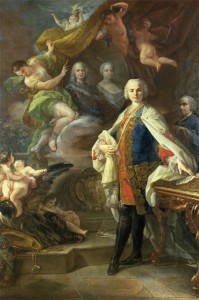 Carlo Broschi, called Farinelli (1705-82), is known as one of the most famous castrati. Obviously, there survives no recording of this unique voice save for the last castrato in the Western World died in 1922. He was Alessandro Moreschi and he recorded less than one hour’s worth of singing on wax cylinders between 1902 and 1904. The technical quality of this historical recording is poor and he was not the greatest of singers – nothing like the eighteenth century forbears – but its odd survival at least is some indicator of the general aesthetic qualities of the voice.

Castrati were virtuoso musicians; their voices were already notable when the castration was carried out. As exceptionally talented their continued intensive vocal training produced exceptional quality of singers – with both range, timbre and technique. Composers wrote specifically for their voice. In the eighteenth century it was this voice rather than the tenor – which was popularly regarded as heroic. Consequently castrati were often found in aristocratic salons and royal courts where women notoriously fainted in their concert performances.  Almost nothing in their repertoire can be performed nowadays.Castrati were particularly known for their unique timbre: because of the surgery performed on them, their voice did not change with puberty. Upon adulthood, the size of their thoracic cage, their lung capacity, their physical stamina and their strength were usually above that of most men. They had, as a consequence, great vocal power, and some were able to sing notes for a minute or more. Finally, a small and flexible larynx, and relatively short vocal chords allowed them to vocalize over a rather wide range – some over 3 and a half octaves –  and capacity to sing with great agility (they could control wide intervals, long cascades and trills).

This new play featuring Iestyn Davies as the singing Farinelli and Mark Rylance is the King. The play by Claire van Kampen essays the broad subject matters better suited to the recent film – which by extension was better able to using computer technology to engineer a vocal sound perhaps nearer to that of a castrato. that is not to complain about using counter tenors in this place for after all the contemporary counter tenor has turned into one of the most glorious additions to the vocal range available for performance in my life time. Alas with his welcome arrival the great contralto has passed from fashion a voice which no doubt in time will come into its own again..

Any play about castrati means there were low hanging fruits to be plucked and plucked they were tonight. There allusions galore to testes and cuts and if there had to be any cuts – the occasional – shit and fuck might usefully have been excised as they were dropped to cause a giggle and not to add to anything in the way of characterisation. In addition to the well received jokes about balls and men not being all the parts they play and such there was a cast of characters who remain elusive and un developed. They were but foils to the King ( Mark Rylance). Rylance himself gave an insinuating and slightly knowing performance which was true to the words but left me wondering whether it was not too carefully crafted to the particular skills of a single actor. 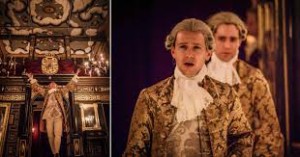 On the subject of men playing parts; not quite being the part they play; and kings being made-up men – I’m not sure this play has added much that Hamlet has not said on this subject at greater length and more concisely. To this dramatic conceit there was of course the an added attraction singing – which was quite beautiful – and it was a pleasure to see Iestyn Davies in court dress…yet as it was the singing was not wholly integrated into the play itself. It was an add-on that might have been as usefully left off.  that said, the costume for Farinelli was to die for….

The play is really a one man show. The man in question being Mark Rylance – Cromwell in Wolf Hall- although the play’s subject is Philip V of Spain – the younger grandson of Louis XIV and the Bourbon successor to the Hapsburg Charles II. The consequent Wars of the Spanish Succession were therefore essentially a family matter which neatly finds its distant theatrical echo in the fact that Claire van Kampen is Mark Rylance’s wife.

It is for court historians to note the coincidence of family connection self-promoting its kin.The stage is one world where this royal practice endures. It is for others to sing its praise or wail its lament.