O, what a fall was there, my countrymen!  Then I, and you, and all of us fell down, whilst bloody treason flourish’d over us.      Mark Antony’s oration, Julius Ceasar, Act III, Scene ii 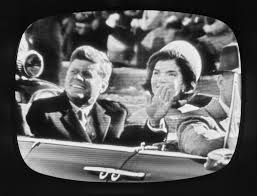 Warren Harding, Zachary Taylor, James Garfield and William Henry Harrison. These are the names of elected Presidents who served fewer days than John F. Kennedy’s score of 1036 days. There are twelve presidents in all who serve only one full term. These include such luminaries John Adams; his son, John Quincy Adams; James Polk; Rutherford B Hayes; Herbert Hoover; Jimmy Carter and George H Bush. Only then do we come to the most iconic of names –  Abraham Lincoln who served 1503 days and who was assassinated shortly after his Inauguration to serve a second term as president.

It is Lincoln’s second inaugural address ( together with the Address at Gettysburg) together with the Declaration of Independence and the Constitution that are the backbone of the civics curriculum in American schools. Most Americans can recite some parts of all of these. Many can also recite part of Kennedy’s inaugural of 1960.  Amongst the eighty odd of these Presidential inaugurals Lincoln’s Second Inaugural and Kennedy’s First Inaugural stand as yet unsurpassed.

From the moment of his assassination JFK’s name is the one most linked with Lincoln’s. They were both afterall assassinated. From the moment Kennedy was shot in Dallas on 22nd November 1963 there was a self-conscious attempt (and a largely successful one) to link the martyred Kennedy with the martyred Lincoln. On her return to the White house that doleful night in November 1963 Mrs Kennedy commanded the White House to be draped in black crepe exactly as it had been for Lincoln. She also commanded that the catafalque was to be the same as those used for Lincoln; the same flowers were assembled in the blue room; the same caisson was to be placed upon the same gun carriage to carry the dead president’s body for the lying in state in the Capitol.

To this careful assembly of heroic gestures in the choreography of death between these two men – Jackie added something of her own – the myth of Camelot. In a personal interview Mrs Kennedy gave to Theodore H. White shortly before she left the White House, she had told him that JFK’s favourite musical was Camelot and that he particularly loved the closing line of King Arthur’s reprise of the title song – don’t let be forgot, that once there was a spot, for one brief shining moment that was known as Camelot…..

In summary it was Jackie Kennedy who did most to make the myth of JFK into an historical reality. Historians since have laboured mightily and with varying degrees of success to expose this mythology as a hollow and empty. They have serial infidentitles; the injections of amphetamines from a quack doctor; the serial lying about JFK’s health; the dirty money that funded some pretty dirty politics; the deal-making; the cover-ups: these all of them have been catalogued. That story has been told and retold by biographers and it little redounds to Kennedy’s credit. Then there is the exercise of censorship by the Kennedy family over what authors choose to write. From William Manchester to Robert Dallek many have fallen foul of the family. Then there are the many conspiracy theorists about Kennedy; RFK; Marilyn Monroe; the brothers’ wives; Rose; Ambassador Joe kennedy (the family patriarch) and any number of mobsters oftentimes it becomes difficult to see the mud for the mud.

Yet, as in his short life, no matter what has been uncovered since his death, some how JFK’s reputation has risen above the despite of his many enemies. He stands godlike  – something akin to a modern day Cicero or perhaps Pericles. The face of this most photographed of US Presidents still sells books. The books keep on coming. JFK’s stature, despite exposé  after revelation, remains towering. In opinion polls conducted since 1963 JFK has remained up there with Lincoln, Washington, FDR and Jefferson. Ronald Reagan has at times out-ranked him but history has its own way of dealing with familiarity of near time but even from the safer distance of 50 years Kennedy still stands out. It is also safe to say that, together with Lincoln; Jefferson and FDR, JFK is the most quoted (and quotable) of the American presidents.

Though as ever with political citations –  the words we quote may well have been crafted by another – in this case Ted Sorensen – the indefatigable speechwriter whose skill turned Kennedy’s dull prose into a sort of epic poetry. Sorensen went on to write speeches both for Bobby Kennedy and later still for Teddy Kennedy. After the high point of Kennedy’s Inaugural Address of 1960, Sorensen indeed gave us a second speech in the pantheon of greatest political speeches –  the concession speech of Ted Kennedy at the 1980 Democratic convention. That speech so moved his listeners that it overturned much of Carter’s program in favour of Ted Kennedy’s more radical proposals. Some believe this doomed Carter’s campaign that fall of 1980 against Ronald Reagan.

This takes us quite naturally to the notion that JFK was himself the leader of the liberal wing of the Democratic Party. This could not be further from the truth. It is true that after the assassination of JFK both Bobby and Teddy remade themselves as heirs apparent to Eleanor Roosevelt’s liberalism. In doing so they claimed to inherit JFK’s mantle stained with martyr’s blood –  much as late nineteenth century Republican Presidents like Grant and McKinley invoked the ghost of Lincoln – the first Republican party president. But JFK’s politics were more centre-right. He annihilated Hubert Humphrey – that knight of liberal wing of the party – in such a ruthless fashion in the primary of West Virginia it left the old establishments of left and right breathless, fearful and suspicious.The primary campaign which smeared Humphrey as unpatriotic for failing to serve in the military also served notice on any who stood in the way of the Kennedy bandwagon, Forewarned, they were not always sufficiently forearmed as Lyndon Johnson discovered for himself at the Convention that selected Kennedy in Los Angeles in 1960.

JFK’s ambitions took no hostages and offered no hostages to Fortune. His choice of Lyndon Johnson was for the basest of political motives – keeping the Electoral Votes of Texas in the Democratic column. Yet it is not for an historian to criticise a politician for being good at his job. JFK appeased the old Democratic Party of the South with its poisoned legacy of segregation and states rights. He smoozed the old Unions bosses who also managed structures almost as deeply corrupt and illiberal as anything south of the Mason-Dixon line. Never forget JFK and Jackie were in Dallas on that fatal day to help heal the deep divisions in the Texas Democratic Party in readiness for his presidential re-election campaign in 1964. Once again JFK was struggling to recreate in his modern image a scelrotic party already in a state of terminal decline. Kennedy struggled to reshape the legacy of the New Deal Democratic Party coalition forged by FDR that by the late 1950’s was falling apart under the not inconsiderable weight of its inherent political inconsistencies and ideological contradictions. In doing so he finally came down on the side of the angels – though again the angel who finally delivered on JFK’s promise was that most compromised of wheeler dealers, the sometime Vice President Lyndon Johnson known to us by the shorthand – LBJ.

This enduring popularity of the Kennedy myth – perhaps JFK’s charisma speaks past the wisdom of the academic elders – is worrisome to historians. They see the Kennedy legacy as woefully short of achievement as it was long on rhetorical flourishes. They see Kennedy’s crafted compromises as less the art of the pragmatist and more deals of the political operator. They see a foreign policy always chasing an easy headline rather than one rooted in the hard slog of diplomacy. This perhaps never more evident than in the fiasco of covert operations known to history Bay of Pigs Disaster. Equally, in the Cuban Missile Crisis in 1962 and again in the national TV address on Civil Rights – Kennedy was proven as capable of leading public opinion – even at political cost to the party he led and the hold on the presidency – as he had been adept at following it. 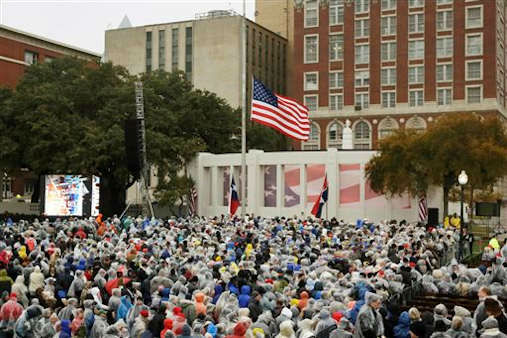 Dealy Plaza fifty years on from the fatal day in Dallas

The assassination left many chapters unwritten and pages blank. Advocates have been as tempted to fill them with their heroic notions as adversaries populate them with steamy sex, the taint of graft and backdoors deals. But maybe Teddy Kennedy has the last word on the magic that was Camelot….

“For me, a few hours ago, this campaign came to an end. For all those whose cares have been our concern, the work goes on, the cause endures, the hope still lives, and the dream shall never die.”