Remembering the fifth of November

The plotters losing the plot

When I was still in my primary school in the early 1960’s – St Mary’s in Cookham Road, Maidenhead –  at this time of year – even in Roman Catholic school –  all the talk was about Guy Fawkes, bonfire nights and fireworks. In those days fireworks were generally sold in boxes in newspaper shops. The manufacturer I remember was Brocks but there may have been others. They contained a variety of sparklers, Roman fountains, rockets and Catherine wheels – all of which were lit by the ‘man of the house’. Fireworks always seemed to me to be a bit of a damp squib. I do not recall there being any borough bonfire or sponsored firework displays but there were plenty of Guys pushed around in old prams by kids from the non Catholic schools….penny for the Guy…..it raised some interest but I think there was more money to be raised by caroling at Christmas. Even so, Guy Fawkes stood surrogate for the suspicions still harboured against the papacy and Roman Catholics. It was only in the 1950’s that the infamous bonfire in Lewes stopped putting kittens into the sack thrown on to the bonfire to represent the screams of the Roman antiChrist in Hell’s fire. 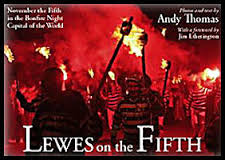 One of the most potent myths of English narrative history was there was no religious persecutions by the Protestant (good) establishment of its Catholic minority; unlike in continental Europe where the Catholic (bad) monarchies used religion to impose social control over their populations by means of the Inquisition and of the of the auto da fe or burnings. The Book of Martyrs by Foxe particularly lays emphasis upon the Marian burnings – as if this was some strange alien method of punishment introduced into England by the (Half) Spanish Queen, Mary Tudor.

The English are good at forgetting inconvenient truths – one of the most inconvenient is the fact it was they who burned St Joan of Arc. The laws De Heretico Comburendo were created by Act of Parliament by Henry IV to deal with that most English of heresies the Lollards in the fifteenth century. There was no greater enthusiast for the use of these laws as a means of political and social control than the hero of Agincourt, Henry V. In the first half sixteenth century Henry VIII and Archbishop Cranmer were not particularly squeamish about burning religious dissenters and particularly sacramentarians like Barnes and Anabaptists like Anne Askew.

The english narrative history also inconveniently forgets the Stasi-like system of rewards created to encourage Protestants to inform on their Catholic neighbours. This system was nurtured under the Acts of Uniformity and later the Conformity legislation. These means were first employed by Sir Francis Walsingham during the middle years of the reign of Good Queen Bess. By the end of her reign the fines for attending Mass were £20 for each offence. These methods were perfected into an instrument of tyranny over a century of continuous adaption.

By the time of Charles I the Penal Laws prevented legitimate inheritance by recusant families. The genocide of Oliver Cromwell in Ireland was without question as brutal an act of religious persecution as any ever devised and executed by man and from which the Ireland never fully recovered. This was even before the treason laws themselves were invoked against any priests, by any laymen, or by any laywomen who hid them.

Under the Merry Monarch ( Charles II) and under the pressures of the Exclusion Crisis and the Popish Plot these Penal Laws were extended further. In Ireland under William III the Penal Laws were used systematically to destroy any possibility of any emergent Catholic middle class. As late as 1670’s Catholic priests like St Oliver Plunkett were martyred by probably one of the most ghastly methods of public execution ever devised –  hanging, drawing and quartering. 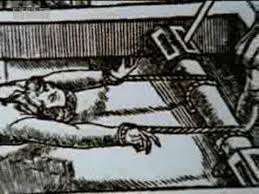 The screw may twist and the rack may turn….Guy Fawkes getting truth pulled out of him…

Thus, the fond notion beloved on nineteenth century Whig historians that Protestant equalled tolerant and Catholic equated with intolerant was a simplification of the truth that verged upon a lie. Propaganda fide wasn’t confined to the stifling confines of the Roman church. Just as silly is the notion that Protestantism was the mother of the capitalist and parliamentary nation state and Catholicism the father of the absolutist monarchical tyranny. History even today trades in these commonplace myths.

There’s a lot of scholars who have devoted themselves to the events of 5th November 1605. One curious fact about the event is that a number of the plotters were former officers from army sent into Ireland to crush Tyrone. The disastrous expedition in the late 1590’s ruined Elizabeth I’s last favourite the earl of Essex. It is these odd men should re-emerge as Catholic recusant plotters since Essex was a patron of the more puritan wing of the Elizabethan church. However, there were rumours in the late 1590’s that Essex had schemed directly with James VI (and Henri IV) and plotted to usurp Elizabeth’s throne. There is the famous letter the earl had from James and which it was said he kept about his neck – a letter whose contents are forever bound to remain a mystery. But hope as Catholics might that a Stuart king might represent a fresh start, it was never routed in any reality. On any reading, James VI left little doubt that as King, although Mary Stewart’s son, he was not heir to her religion or her beliefs. History is littered with examples of wishful thinking by those who might have been expected to know better.

The plot by a group of Catholic conspirators to blow up the Parliament House at the state opening, thwarted at the last minute, played up to the notion that God was on the side of the English and of their church – a notion that had taken firm root in the propaganda of the Armada and the repeated failures of Spain’s successive attempts to invade – this blessed isle.. 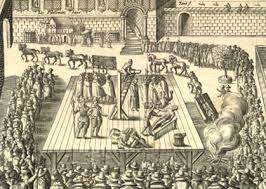 The day set aside by Parliament to memorialise this lucky escape sculpted by the hand by Divine Providence was 5th November. In fact its bonfires and street games were adapted –  not from All Saints and Halloween –  but from the much more important feast of Martinmass on 15th November. Martinmass which was the last fair day before Christmas. Martinmass itself was an overlay on Yuletide. Martinmass carolers and players and mummers were aided and abetted in their rowdy japes by roasting the hog and much drinking of newly fermented beer from the harvest. In parts of Germany these traditions survive.

Guy Fawkes replaced the scarecrows that no longer had any function on the newly harvested fields which were being dug over before the winter frosts.These scarecrows burned in fields and village greens as part of the old Martinmass celebrations and had themselves been straw echoes of the wicker men burned by Celts at Samhain. The Puritans had by a process of stealth – perhaps best satirised in the person of Malvolio in Twelfth Night – taken away the cakes and ale from these familiar fairs and festivals kept on the streets and village greens and replaced them with bibles and prayers.

So, by all means let’s remember the 5th November and the gunpowder, treason and plot. But let’s remember it was surrogate for a less political and hateful bonfire season which reverenced the rhythms of seasons turning more by burning the dry waste from the harvest than as a means of silencing one’s errant religious neighbours.

This entry was posted in History and related subjects. Bookmark the permalink.