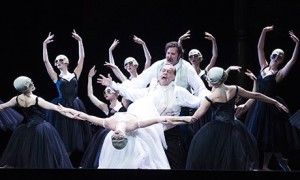 Volle and the ballerinas

It has taken 158 years for this opera to reach Covent Garden. Composed in 1855 for the Paris opera It was a favourite of Hector Berlioz. It is very much composed and imagined in the grand opera tradition of Paris. It contains all the popular elements for this genre beloved in the Imperial city of Napoleon III. This afterall was the Paris of Meyerbeer, Auber and Halevy. Grand Opera was in high fashion. These were the golden years for the Paris Opera, richer than Midas, it commissioned on a prodigal scale and sought works which combined spectacle with telling melodrama. In a way, like perhaps the Met in the 1950’s and 1960’s, as Paris was the richest of Europe’s houses it was also highly influential on the form of opera. But money oftentimes doesn’t lead to the best art.

Verdi had already had some success in Paris with Jerusalem ( I Lombardi). But by this period of the mid 1850’s Verdi has matured as a composer and in that process he had emerged from the crowd of successful opera composers, that included in addition to those above, Rossini, Donizetti, Bellini, Gounod, Bizet, Berlioz and the brooding genius of Wagner.

Verdi had just composed Rigoletto,Traviata and Trovatore. He had conquered the Italian opera by remaking it in his own image. One cannot help but think he deliberately now sought to do the same in Paris. Verdi chose the premier French librettist, Eugene Scribe, for his new commission. Scribe chose a story (originally set in the sixteenth century Netherlands of the duke of Alba) which he had worked on with the dying Donizetti. In a sense the story therefore is old fashioned speaking more to the tastes of the 1830s than the 1850s. Scribe suggested  updating it by resetting the action in Sicily. This potentially offered setting in story in  a location where spectacular stage effects Paris had made its hallmark might be employed – volcanoes after all always offer an exotic and explosive backdrop to dramatic action. Inspired, Verdi suggested incorporating into the action the infamous quasi-historical incident which gives the opera its title – the massacre of the Norman-French by native Sicilians at Vespers in the Cathedral at Palermo. 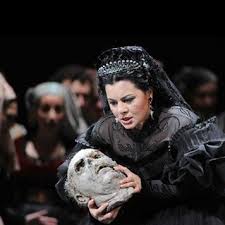 Helene with the head of her martyred brother – Act I

The opera was written in the structure Meyerbeer had very much made his own. It included extensive dance music and ballets, including one in Act III which had thirty minutes of minutes music especially composed and which is rarely performed. In the Italian version it is cut altogether. The ROH had promised to restore the ballet and perform the opera in its five hour glory – in the end artistic disagreements put paid to that ambition. There were also plenty of vocal fireworks for the singers to deliver….perhaps in some ways too many.

The Vespers marks a decade where Verdi is much preoccupied with the vehicle of grand opera. This is the least satisfying of all this attempts at writing in the genre. To be honest the libretto lacks coherence and Scribe despite being well paid attended very few rehearsals so many of the structural inelegancies of plot and music were never ironed out. Moreover, though Verdi had mastered many of the components of grand opera musically he never seems quite to catch light in Vespers. There are mesmerising sections but the whole is a lumpkin thing.

Some of the ideas he plays with prefigure Don Carlos (also written for Paris) and some like an assassination at a masked ball prefigure ideas he will better in Un Ballo in Maschera. It is the former opera, Don Carlos, that is today regarded by many as the masterwork of this period and of this genre. Personally I also love La Forza del Destino which plays much more successfully with many of the same elements as Verdi uses in Vespers. At the end of the day it’s all down to libretto, libretto, libretto. The words and plot are much more important to art of opera than any but composers are wont to realise.

Finally Vespers also had to compete with the fact that in the 1870’s Verdi was destined to have a final, transcendent word on the genre of grand opera uniting music with exterior spectacle and interior personal drama in an the unsurpassed magnificence known as Aida. That said, Don Carlos, La Forza and Un Ballo hold their place in repertoire mainly because of their epic sweep has dramatic coherence. Vespers, however, remains beached uncomfortably between the vocal fluency of Verdi’s early operas and the intense emotional musicality after Traviata and Rigoletto.

Nevertheless, it was a moment to see this great work performed.

No one can say this production lacked for spectacle. Much money thought and care has been lavished on this production. Perhaps I am a bit jaded since this is the third staging at the ROH on the trot that sets an opera within a theatre. La Donna del Lago and Gloriana have left me with little appetite for this device. Though by comparison this certainly makes the stage work. I thought the conceits mannered and the idea wearying. The trouble with clever ideas is that they have to last over four and half hours. They seldom get beyond Act II. This was no exception to this rule. By the time you get to Act V of Vespers most of the ideas have been so thoroughly explored there is nothing left worth saying. In addition although I love the lousche vulgar grandeur of Napoleon III’s Paris, which this production realises beautifully, trapped within the re-realisation of Vespers creaky plot as a costume drama inside a grand old opera house – did not clarify the storyline nor the characters. 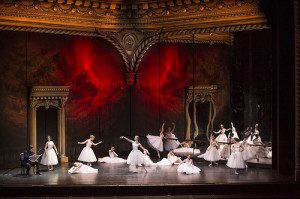 Even so, I cannot help but think it is a bit of a dull visual reprise of all Zeffirelli achieved in his film of La Traviata. Even Helen’s lovely dresses made me think of of those given to Madame Stratas in the film. However, putting Erwin Schrott into a glitzy black sparkly version of Helen’s white wedding dress was original – although a little on the camp end of the cliche of drag. Schrott certainly threw himself into the moment and swept the stage magnificently waving a French flag – like Lily Savage on acid. Clearly inside one of the world’s biggest baritones there’s a drag queen trying to get out. But though this gesture was fun it was also just plain silly.

I was pleased as punch to see and hear the Hélène of Lianna Haroutounian. She looked ravishing and sang pretty damn well too. I thought the cabaletta in Act I was brilliantly delivered though I know other disagree with my judgment. She has a lovely creamy voice and can really produce a sound of melting fragility with that big voice. I think she is to be one of the great starts of this century.

Michael Volle seems to be specialising in bad guys – I saw his Scarpia twice earlier this year. Volle certainly threw himself in to the role of Guy de Montfort who is the french Governor of Sicily. In the prelude Volle is seen in a rape scene which leads to be birth of Henri, his illegitimate son. Verdi once more preoccupied with the inter-generational conflicts between father and son. Volle sang to effect and acted with supreme confidence though to honest he brought nothing more subtle to this role than I had previously seen in his account of Scarpia.

Subtle was another thing that eluded Erwin Schrott as Jean Procida. Schrott is blest with a huge voice and it produces some really beautiful sounds. However, he has the tendency to sing as if forte is always the best means of conveying high emotion. It isn’t. In using his voice to this single effect he sometimes wastes his greatest asset. We demand more acting technique these days from singers and Schrott can act but he needs firm direction. If he acted with more interior passion and less waving his voice would bring out the internal agony and emotion in the music. He is still amazing and it was a grace to hear him.

Bryan Hymel gave us an Henri which was creditable. But I did not much like him in Meyerbeer’s Robert le Diable. As Henri at times he struggled with both Erwin Schrott and Lianna Haroutounian, who frankly out sang him. Hymel has a lovely voice but it lacks power on those exposed high runs beloved of the melodrama that’s grand opera. He is also another who strides too much and thinks to little about his singing. In the great trio in Act V leading to the long delayed consummation of marriage and murder – he seemed out of his depth. 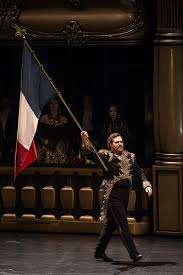 So there you have it – a curate’s egg of a Vespers – good in parts; overawed by the concept of the production; sometimes a bit over-sung and still at moments beautifully realised. Oddly given the dancing we saw from the corps de ballet I think it was a shame they cut the grand ballet of the four seasons, which has probably the best music in the opera – truth be told.

It was well worth seeing but I can see it will not be well worth repeating for another fifteen years or so – the Sicilian Vespers has too many problems to become a part of the standard repertoire in the manner of say Don Carlos – or even Il Trovatore which despite its bizarre storyline is dramatically and musically compelling.