Remembrance of Times Past – A Student at Leeds 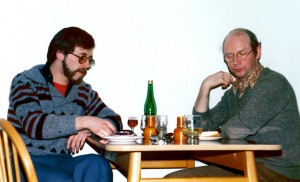 Ian Robson (left) was my friend from my second year at Leeds onward.  I’d like to honour that by remembering him in this season of remembrance. Initially Ian lived in the Hostel of the Resurrection which was one of the halls of residence in the University run by the Mirfield Fathers. They were an Anglican order at the highest peak of what was still then called the High Church. Later Ian moved in Devon Road with me when my friend Brit – a beautiful fun, clever bright, blond girl who was at the Metropolitan University – had moved-out. We shared the flat above Harry Farrer’s shop for two years. Harry was a bookie straight from the set of Coronation Street. He was a lovely man and actually had a heart of gold.

Ian and I met through mutual friends Alec and Tim. I met them in my first year – I don’t need to be too specific – but suffice to say it was with them that I was embarked upon my adventure into sex. Alec and Tim both fell early victims to the AIDS plague that carried away so many lives. They were special to me for all sorts of reasons. I still have the dictionary they both gave me for my 21st birthday present.  Ian and I became social friends and never were partners – unlike many of my gay friends. I would go to his rooms in hall for sherry and gossip.We were both passionate about religion though on opposite sides of the confessional divide. We also both loved to cook and we were good at it. One of the first things we did together was to cater for the Summer Ball at the Hostel. As I remember we had a budget of £100.00 pounds to feed 200 people. It was mad cap fun. The hostel was not exactly a den of vice – though vice was on offer in many rooms over Harvey’s luncheon dry or Ruby port –  but it was certainly a refuge for the camp. The fathers were good men – full of humour as I recall. The catering exploit really brought us together and thus we became friends.

Later Ian and I and another friend from Leeds David Hambleton drove to London to start a new life. I’d met David in my first year at Leeds in the gay club which I remember was called Charlies.  David was town rather than gown. In fact he and Ian dated for a while. Charlies wasn’t exactly sophisticated but it was a place where we could go out and be ourselves and meet other gay men. In my first year at University I was still teetering on the wrong side of coming-out. This was a time in 1973 when it was still a very big deal to be gay and in Leeds and a Yorkshire dominated still by mining – it was an even bigger deal.  Charlies was full of extraordinary larger than life characters –  like Cyril Livingstone a plump corsetier in Brigate who upholstered most of the Jewish ladies of Roundhay and lived large on the proceeds. I recall on Saturdays there was a mixed night for gay men and gay women. After midnight when drink had got the better of restraint there was usually a fight on the dance floor between some of the women over another girl. We gay boys clung to the wall  – wall flowers staying out of trouble. I can see the glittering back wall of the dance floor  – it was covered with egg boxes sprayed with silver car-paint. There was a single ultra-violet light and some strobe lights over the rickety dance floor…more trampoline than floor It looked more like one of those make-shift sets from an early episode of Dr Who than a night club. Strangely I can’t remember the music – these were the days just before ABBA and Dancing Queen and well before Disco changed the world and the clubs forever. But there must have been music because I did dance. Students dressed-down in bright patterned shirts and loons or some such – the townies dressed-up in tight three piece suits straight from Burton’s.

In those early days Leeds had no proper gay bar and what we euphemistically called cottaging was the other prime place to meet other gay men. Of course running the risk of public toilets meant also running the risk of arrest. Leeds had a particularly severe regime of arrests and fines. It was in my third year just at the start of finals I fell foul of the law and had one of the most traumatic experiences of my life. I felt so ashamed. The police were so manipulative. I didn’t go to a lawyer which I should have done.  After being arrested fingerprinted and having a mug shot taken I was returned to the flat in Devon Road at 3.00 am in the morning in a police car  – blue light flashing.The police persuaded me to plead guilty – saying they’d go easy on me evidence-wise. I did but it turned out the police lied. They presented a tissue of untruths about the circumstances of my arrest.  For weeks I lived in total fear that it would come out to the university or worse that somehow my family might find out what I had been up to. But it also was a turning point. I came-out. I swore I’d never be conned; never be lied to and never to be a victim again – just because I was gay. And I would never again feel ashamed of  being gay. It was an important to discover that actually I wanted to be gay; I was glad to be gay; and if needs be to be militantly gay.

So it was in the summer of 1977 – the same year as this photograph –  that Ian, David and I hired a white Ford transit van and drove from Leeds to live in London. After a couple of weeks searching for somewhere to live we ended in Acton Town, in Gunnersbury Lane, nearly opposite the Acton Fire station. I can still see the firemen sitting outside the station during their long strike through the winter of 1978. Ian and I gave them home made mince pies and hot potato soup as they sat shivering by their small coke fire in the freezing cold. We lived on a tight budget – £5 a week for all food and household stuff which involved us eating endless quantities of pilchard and sardine quiche. Creena, my mother, and her then partner Brian, came to visit endlessly, always bearing gifts and always willing to take us out for a steak at the Berni Inn in Ealing.

Mum gave us an old washing machine – with a mangle. We used to do the washing on a Monday in this lime green bathroom. The water would get too hot to touch.When we were finished there’d be suds all over the floor. We still managed to find the money to go out to the Coleherne pub in Earls court. It was a gay landmark in its time – the place to go in London. Once a friend of mine from the USA Jeb Boswell thought it would be easier to find me randomly in the Coleherne than write and tell me he was coming over to London. We had no telephone in the flat and the call box by the house was pretty much permanently vandalised. And find me there one night Jeb did and we had him to dinner. I remember making ice cream. On another occasion i made a lemon mouse with only two forks to whisk the egg whites. It took a time to do stuff.

Ian quickly made lots of friends in London. for the three of us it was our first adventure into the gay world. We three were out but still when I look back so naive. Together in London  three young gay men let loose in the flesh-pots of the city of the plains. Another friend of Ian’s from Leeds whom I barely knew, Philip, who had studied International History and Politics at Leeds also moved to London lived nearby us in smart Chiswick. Philip and I have, with ups and downs, remained friends since those heady days.

Ian had grown up over in Manchester. His family life had been a hard, much tougher than mine. He wore its scars bravely but it made him very generous to others emotionally and spiritually. He had a lovely bright laugh. I see the two are of them are sitting in the kitchen of the flat in Leeds. It had the gas fire and the oven making it the hottest room in the house! Ah how many serious conversations were had there – how many problems sorted; how many of the world’s wrongs put to rights. I’d forgotten those very 1970’s cruets. I loved them at the time – thought them very cool. I had also bought a cheap dinner service from the department store Lewis’s on the Headrow. The pattern was called Aztec. I think my friend Roger Mettam still has the service in his house! We felt we were equipped to entertain and we had loads of people over to dinner – including my supervisor Dr Christopher Challis and his delightful wife Tina – who was also a Tudor historian.

Ian studied theology at Leeds and after our time together in London he went on to become an Anglican priest in the early the early 1980’s.  We had something of a falling out over nothing very much. Later we made up and for a time I would visit with him at his vicarage in Willesden Green. Then he began to feel less and less well. It was never absolutely clear what was wrong. But his liver function went off the scale. We spoke a few times – then suddenly he was dead. It seemed a mystery at the time – we’re talking the early 1980’s but within a few years these mystery deaths were all part of a bigger pattern. Ian was a gentle sweet kind man.  I was very lucky to have met him and luckier yet to have been able to call him a friend. I much regret I did not show more compassion. Though youth is heedless I was undoubtedly selfish when I might have done more and been a better friend. May he forgive me for my selfish stupidity and vanity and may he Rest in Peace in the company of angels, saints and friends. He had a gift for friendship.

He is sitting with Peter Johns (right) in the kitchen of our flat. I met Peter whilst working as an evening receptionist at Leeds Playhouse an institution which later morphed in to the West Yorkshire Playhouse which is now located on the site of the old Quarry Hill flats which were famous for their design in the 1930s but had become a rat infested hell-hole by the time i arrived in Leeds. I so loved that little job and had so much fun working in the front of house at the theatre. Michael Attenborough was the deputy director in those days. Peter was an actor and something of a playwright and the year in question the Playhouse mounted a panto he had written called Hullabaloo in Fairy Land.  I can still hear his voice mellifluous voice ‘oh luvvie I’d not do that if I were you’. He really a very funny gentle man. We lost contact but he remained friends with another of my Leeds student circle – Tony Trent – who very generously donated these pictures to the site.