Remebrance of things past – Student daze at Leeds 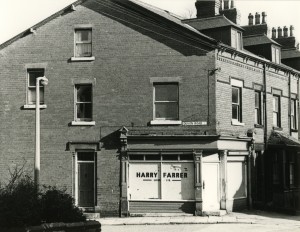 Picture also in my Life in pics gallery – donated by Tony Trent.

Yes folks that’s exactly how it was….

Our bedrooms were in the attic. By student standards it was a big flat with a lounge, kitchen, bathroom, toilet and two large attic rooms we paid £5 per week rent – paid in advance out of our student grant which was then I recall about £480.00 a year when I started University. It went up by leaps and bounds over my years as a student. These were the years of high inflation –  26% in one year – and of strange food shortages – coffee, sugar, then of all things potatoes. We’d go down to the covered market in the city centre to shop. Parsnips, swede and then sweet potatoes and yams replaced the common staple. I’d carry them home in bags – struggling under the weight. In those days I walked absolutely everywhere.

I moved into Devon Road at the end of my second year. I moved in with Cathy Brenand. She was a friend of Nigel and Kath with whom I lived in my second year in the house at the end of Trelawn Avenue in Headingley. Cathy Brenand was a wonderful woman – classicist – with driest sense of humour. I remember sharing a lot of laughs with her watching the comings and goings of another student house full of  (attractive, straight) young men who lived on the opposite side of the road to us. It was the summer of 1976 and we ate endless strawberries in the endless sunshine that lasted through from early May to September. By the time I left the city to go home there were stand-pipes in the streets.

Devon Road was my third place of residence in Leeds.

In my first year I had gone into flats – Lupton Flats – in Headingley, by the Arndale Centre. I did not want to go into a hall of residence – shades of my brief time at boarding school – which I had truly loathed. I had to go to board at my school because my father had evicted mum and me and my sister from the family home in one of his recurrent bouts of violence. The three of us were literally on the streets. Mum and my sister with a shopping basket on wheels and a few bags went from one friend’s house to another whilst the police and the courts tried to sort matters out. Eventually my father was evicted but that only made the marital breakdown more bloody for all of us. It made us strangely very close. But that’s another story.

My arrival in Leeds was a bit like leaving home. I was lonely and for almost a term I ached to go back home to Maidenhead. Though I wore the brave face the truth was I was also very insecure. At first I went to St Anne’s Cathedral often because – I suppose it was comforting. I used to see Jimmy Saville now of scandalous memory sitting in an old parkas jacket. He was always at the back of the church.  I remember the Freshers Conference when a couple of guys from the Gay Soc thrust a leaflet into my hands. I felt like I wore the mark of Cain. Our fresher’s guide was a guy called Michael Rose Leeds born; Leeds United fanatic; but a good guy. We became friends and I became friends with his group – mainly second and third years – amongst whom were Nigel Ward, Kath, and Colin Calloway and also Enid and Alison. The gods forever smiling – I never really looked back from that point. Still if I was lonely I was also able to gradually dip my toe into the pool of another world that both attracted me and frightened me. The other guys in the flat were also second years. They actually kept an eye out for me. They very tolerant and I was lucky.The flats at Leeds occasioned two episodes which stick vividly in my mind.

First, I met a woman – maybe in her late forties then – my mum’s age – she was called Stella who lived in a flat in a large Victorian mansion almost opposite University flats on the far side of a tree-lined gravel road. She was Bohemian and in every sense and it fascinated me. Somehow we fell into an easy going friendship which lasted until she left Leeds for London. She always reminded me of the wife of Bath – gap-toothed and all. She laughed a rolling contralto of a laugh full of humanity and lust for life. Every first Monday each month she hosted an at home evening. She hosted in so far as she provided a venue and others provided wine and beer and food. Every Saturday at quarter to six Stella McClellan could be reliably found in the Safeway on the Arndale centre sniffing out the bargains being marked down before close of business. She had been divorced and managed on the tightest of budgets. Those were the days when shops closed sharp at six and did not open again until Monday morning. She introduced me to the joys of a bargain hunt! Stella also knew a couple who ran a pub near the city centre – I want to say the George – and where you could get locked in and drink all afternoon. High octane stuff to a first year student! She also knew all the actors and artists and others of an artistic bent who made their way into the city. And amongst their number were numbered an unusually large percentage of gay men.

My second enduring memory is having a shower late one morning all alone in the flat. The lights and water went off suddenly. I thought it was a prank by my flatmates. The temperature dropped and I though I could feel someone breathing on the back of my neck. Spooked I fumbled in the dark for the lock to the door. The lights were on in the hall and everywhere else things seemed normal. I ran into my bedroom and left the door open. As i was getting dressed – in a bit of a hurry – the bathroom door opened and all the lights went out. I ran for it – scared shitless in the immortal words of the Bard. When I got outside I bumped into this guy called Bruce – whom I admit I had a bit of a crush on – and who was straight as the proverbial die. I must have looked frightened as he invited me into his flat. We had coffee I was still shaking and he put a miniature whiskey in it he’d been given. I didn’t dare tell him what had happened. Subsequently I used regularly to get the same spook on the way home in the shaded lane along by the flats. I would run down them into the lighted parking area. I never mentioned this to anyone but mum who was a bit fey herself. It was along that lane a few years later that the Yorkshire Ripper murdered one of his last victims – a student living in the same block of the flats as me. I’m not sure they’re connected events but it’s a curious business and it’s the only time I’ve really had such an experience.

In my second year I lived with friends I met on the first day at the University – Michael Rose, Nigel and Kath. I was living there when I met my first proper boy-friend Bob Sheldon. Bob was also Yorkshire born. he had the most amazing periwinkle blue eyes. I think I remember being in love. Perhaps I wanted to be in love. But love is quicksilver. It slips easily through you fingers and is gone. It’s as apt to be fools gold as it is the twenty-four carat real thing. Bob lived out in Denby Dale with friends from his Bretton Hall days – Gaynor and Llew. And though we were not students together we bonded. We’ve remained close friends – I grew up with them and maybe for the first time felt comfortable being gay with close friends. We are still friends and I’m a proud godfather to their two beautiful daughters Sarah and Leah. And Gaynor and Llew came to Gunnersbury Lane in Acton just before embarking upon the adventure of their life – travelling around the world. They loved my friends Ian and David and of course taught them as they had taught me how to play bridge….and how to smoke hash…tut…tut…still what’s legal now in Colorado isn’t something to be denied.

I little realised how precious these times would prove and how enduring some of those relationships would turn out to be.Is there anything sweeter than revisiting the memories of a lifetime and sharing them with others? We are made only for the present but the past we lose to life can remain golden in our memories and that is sweeter still than our dreams of the future. In cherishing the things we know that have shaped us and made us better men and women are the things that will endure from generation to generation. Like love they are better shared and best when they are shared. In that knowledge there is the wisdom of all ages.