For whom the Bell tolls…..

Additional works to be announced from the stage. 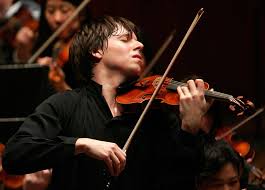 Virtuoso are by virtue of what they do – extraordinary.  Last night I saw Joshua Bell play for the first time. He plays the 1713 Huberman Stradivarius. The Stradivari family made violins in the seventeenth and eighteenth century which we renowned from the purity and clarity of their sound. The dense slow-growing spruce of Cremona were used but the full technique involved in the manufacture of the violins remains a mystery wrapped in the inevitable enigma of superstition and half-truth that passes for fact in this word. Suffice to say the instrument doesn’t play itself.

Bell is a native of Bloomington Indiana and is often described – rightly – as the ‘poet of the violin. He plays with  all the virtuosity you might expect from an instrumental soloist but much more – he draws sweetness of note and plaintiff delicacy from the music that gives the experience a spine tingling thrill. He wears his great talent modestly. Sam Haywood – also played beautifully particularly in the Ravel and Prokofiev. Haywood is from the UK and has been  duo partner with Bell for sometime. This makes the music especially delightful as they both give each other the space to play and to shine. Rapport is essential in a performance of this nature.

Th last piece was Saint-Saëns’ Introduction and Rondo Capriccioso in A minor Op. 28,  and is a composition for violin & orchestra in 1863 for virtuoso violinist Pablo de Sarasate. Since its 19th-century premiere, it has continued to be one of Saint-Saëns’ most popular compositions and Bell and Haywood gave us such an account of this fabulous piece it justly brought the entire audience to its feet.

The Mondavi Centre for the performing Arts is part of UC Davis campus. This is such a fine concert hall -with a beautiful acoustic – and a grand entrance that reminds me something of the Lincoln Centre. The audience was delightful possessed of that special spontaneity only Americans bring to performing arts.

Here is something succulent from the two men: Bell & Haywood in Moscow

This entry was posted in Reviews. Bookmark the permalink.